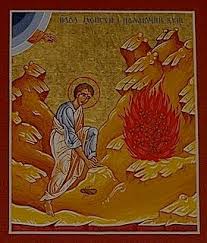 The glory of God might seem an odd topic for reflection during Lent. After all, we omit the Gloria at Mass, and we direct our attention to the Lord’s temptation and his passion. But the Sanctus reminds us, week by week—even during Lent—that ‘heaven and earth are full of [God’s] glory’. We don’t always recognize that glory: it is hidden. As John’s gospel tells us: ‘the Word became flesh and dwelt among us, full of grace and truth; we have beheld his glory, glory as of the only Son of the Father’ (1.14). Jesus makes God known to us; all the fullness of the Godhead was pleased to dwell—hidden—in Christ. Peter, James and John glimpsed that glory at the transfiguration of the Lord. They learned to see in Jesus, even after his brightness subsided, the radiance of divine glory. So also we learn to see the world differently as the eyes of our hearts are trained by faith: to see Christ’s presence in the Eucharist, for example; or to see his face in the faces of the poor and the marginalized.

Learning to see in this way does not give way to full vision, however. The mystery of God’s presence in the world is like the mystery of the Incarnation itself. How does God become human without eliminating or overriding the human? The Old Testament reading from the third Sunday in Lent gives us a way in to contemplating the mystery: Moses encounters a bush that burns, but is not consumed. So also God’s presence with us and in us throughout creation enlivens and enlightens us, but does not consume us. Only that which is incompatible with God’s presence (that is, sin) cannot survive the coming of the Lord. The flame of God’s holiness burns in us—as in the burning bush—but all it consumes is sin.

As we sing ‘pleni sunt caeli et terra gloria tua’ (‘heaven and earth are full of your glory’), let’s remember that ‘caeli et terra’ includes us. We strive for holiness in the hope that the glory of God may one day be revealed in us as well.

(from the second Sunday in Lent: I am catching up…) 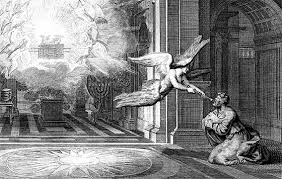 The scene that follows the announcement ‘holy, holy, holy’ is dramatic: ‘the foundations of the thresholds shook at the voice of him who called, and the house was filled with smoke’. Isaiah’s response is not worship, as we might expect. Instead, he exclaims, ‘Woe is me!’ Seeing the holiness of the Lord makes Isaiah aware of his own lack of holiness, and fearful: ‘a man of unclean lips’ should not (he thinks) behold ‘the King, the Lord of hosts’. God’s glory shows up all that is unworthy about us. Similarly Peter, in the gospel reading from a few weeks ago, responds to the miraculous catch of fish: ‘Depart from me, O Lord, for I am a sinful man’. Beholding the greatness of the Lord brings about a new, and unsettling, revelation of our own lack of sanctity. The response from on high is not judgment, however, but comfort. One of the seraphim brings a burning coal from the altar, touches Isaiah’s lips with it, and announces, ‘Behold…your guilt has been taken away, and your sin forgiven’. Likewise Jesus reassures Peter (in the same words the angel used to put Mary at ease): ‘Do not be afraid.’

Contemplating the holiness of God ought to make us mindful of the ways we have sinned and fallen short of the glory of God. This is not the way into condemnation, though, but the door to forgiveness and new life. For both Isaiah and Peter, the recognition of his own unworthiness marks the beginning of a career (if we may call it that) in the service of God. Isaiah accepts the invitation to take God’s word to the people of Israel, and Peter becomes that rock on which the Church is built. Our own careers of discipleship may be less dramatic, but God nevertheless promises to draw us near and involve us in the real drama—the drama of our redemption and that of the whole world. We need not ask whether we are worthy; we need only allow God to make us so.

This Lent, I am writing a series on the Sanctus for my parish newsletter. Although I do sometimes wonder whether anyone reads the back of the bulletin, a few people have been kind enough to remark on the short pieces. (I did a series on the creed in the autumn.) Here is the first installment (printed for the first Sunday in Lent):

During Lent, we direct our attention to the holiness of God more than at any other time of year. Not only that: we strive to imitate that holiness. One of the ways the Church has called the holiness of God to our minds comes from the sixth chapter of Isaiah: the prophet sees the seraphim, who call out to one another: ‘holy, holy, holy is the Lord of hosts; the whole earth is full of his glory.’

The acclamation has been a part of the Church’s liturgy since the early part of the fifth century, though it was probably in use from even earlier times. (The ‘Benedictus qui venit…’ was attached to the acclamation very early, and in future weeks we will look more closely at it.) For example, St Augustine would recognize the Latin text we sing, although the traditional Gregorian plainchant would not have been familiar to him. (What we rightly consider ancient—dating from the 8th century and widespread by the 11th—had not yet been developed in Augustine’s day!)

It is not just the antiquity of the text that ought to inspire us, however. The inclusion of the Sanctus in the Roman canon in the 5th century brought in the idea ‘that by joining the angels in their song we participate in the heavenly liturgy’ (Enrico Mazza, The Eucharistic Prayers of the Roman Rite, p. 48).  And this provides an important clue to the means by which we imitate the Lord’s holiness; by participation. All our Lenten practices—prayer and giving, and giving up—do not work magic on their own. Rather, by them we join ourselves to the Lord’s suffering. It is his passion and death that worked for our salvation, and in his resurrection that we are raised to new life. So in all that we do this Lent, our aim is to make more space for our Lord, so that we can say with the apostle Paul, ‘it is no longer I who live, but he who lives in me.’ When we attend to the presence of God among us and in us, and we participate in him as he dwells in us, holiness will be ours as well.