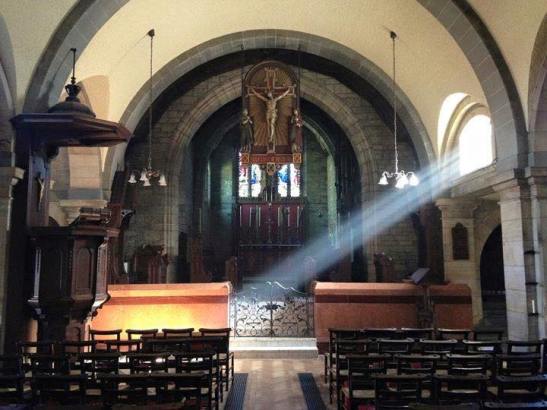 The church in which we were married

Whether fifteen years is a long time to be married depends on your perspective, even if you happen to be the couple celebrating the 15th anniversary. As it happens, we are. A lot can happen in a decade and a half, for better or for worse. We’ve had our share of the ups and downs and joys and sorrows of married life. Nothing too interesting there.

One thing that has long bothered me, though, is the feeling that I’m not feeling what I ought to be feeling. As cynical as I am about the portrayal of romance in Hollywood, and as committed as I am to ‘as long as we both shall live’ (and not ‘as long as we both shall feel like it’), I worry that I should experience certain emotions more than I do, that I should not only be devoted, but I should (always) feel devoted. You know, that in love feeling that carried us into marriage. I have a friend whose love story is enviable. Everything points to their still being in that same love, in the same way they were when they said ‘I do.’ And I envy them.

Because of this envy, and because of my worry, I read blog posts and articles about marriage, and how to make it last. I’m absolutely committed to the lasting, and I don’t think our marriage is in any danger. But I believe that making it last must involve some things that might make what we have better, so I keep reading. What I have found is that some of the advice tells us to keep up the good work–we’re already doing what the successful couple does;  some of the advice seems good, and I intend to follow through on it…but often I don’t;  and some of the advice seems like a pair of jeans that look promising but don’t really fit.

We can learn a lot from each other, I think–that’s why I read the marriage advice and suggestions. But one of the most important things that has come of my study of the top tips to keep your marriage strong is a sense that we’re doing all right. This, I submit, is the most valuable help I could have hoped for. Because there’s nothing like feeling like something might be wrong to make you think that something is really wrong. Just knowing that there are couples out there who are working hard at their marriages makes me realise that not everyone is as lucky as my friend. We have been carried into this thing called marriage by a love that was bigger and stronger than we were–at least that was my experience. No wonder we have difficulty keeping hold of it.

So, for those of us whose experience of getting married was that tidal wave of bliss, marriage must be a process of growing into that love. The thing is, though, that the Love is not only bigger and stronger than we are, it is also as unique as the two of us who share it. Each love has its own measure, its own character, its own rhythm. My own experience of marriage has much in common with the spiritual life: there are periods when obligation carries me. That’s not inauthentic. It’s that same love carrying me in a different way. It feels different, of course, but it carries me all the same.

In those times, those times when the bliss that swept us to the altar seems to have been swallowed up in chores and errands, it’s the psalms of exile that speak to me: remembering and hoping; remembering the joy of being at home, in one’s own country, in the love that feels like love, and hoping for the tide to come back in and wash over us again. The psalms of exile remind me that the experience of desolation, even in marriage, is just another part of the whole. In a culture in which marriage is held up as the antidote to loneliness and an essential component of ‘happily ever after’, it is liberating to know that sometimes in order to remain in love, we have to live in hope. So whatever love happens to feel like today, whatever form it takes, it is still carrying me just as surely as it did on this day fifteen years ago.