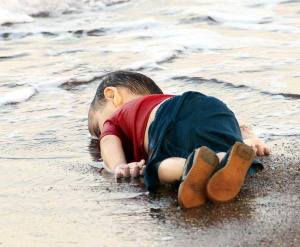 I cried when I saw the photo of that very small boy washed up on the beach in Turkey. How could I not? My own so small girl went to school this morning, dressed in her uniform, curls bouncing behind her. That is how it should be. Yet so many parents are struggling just to get their children to safety. As a parent, I am heartbroken. As a citizen of the so-called developed world (developed technologically, perhaps, but downright backward in its values), I am ashamed of us. How did the world get to be like this? In the words of Cardinal Altamirano at the end of The Mission: ‘Thus we have made the world. Thus have I made it.’

But I cannot stay here: babies are being born in safety, people are finding their way, and the little things must still be occasions for joy, even in the midst of such powerful and deep grief. Though I mourn for this small boy, his only-slightly-less-small brother, and his parents, I must hope. I must hope and allow joy to break through. So I turn to one of my very favorite passages in a very good book: The Return of the Prodigal Son, by Henri Nouwen. He talks in this passage about ‘a friend’ whom I have always admired. (I think it is Jean Vanier, but Jean doesn’t admit it!) I pray that we can all find this joy and allow it to give us courage as we work to make the world a place in which small boys and girls play and sleep and laugh in safety.

I have a friend who is so deeply connected with God that he can see joy where I expect only sadness. He travels much and meets countless people. When he returns home, I always expect him to tell me about the difficult economic situation of the countries he visited, about the great injustices he heard about, and the pain he has seen. But even though he is very aware of the great upheaval of the world, he seldom speaks of it. When he shares his experiences, he tells about the hidden joys he has discovered. He tells about a man, a woman, of a child who brought him hope and peace. He tells about little groups of people who are faithful to each other in the midst of all the turmoil. He tells about the small wonders of God. At times I realize I am disappointed because I want to hear “newspaper news,” exciting and exhilarating stories that can be talked about among friends. But he never responds to my need for sensationalism. He keeps saying: “I saw something very small and very beautiful, something that gave me much joy.”

The father of the prodigal son gives himself totally to the joy that his returning son brings to him. I have to learn from that. I have to learn to “steal” all the real joy there is to steal and lift it up for others to see. Yes, I know that not everybody has been converted yet, that there is not yet peace everywhere, that all pain has not yet been taken away, but still, I see people turning and returning home; I hear voices that pray; I notice moments of forgiveness, and I witness many signs of hope. I don’t have to wait until all is well, but I can celebrate every little hint of the Kingdom that is at hand.

This is a real discipline. It requires choosing for the light even when there is much darkness to frighten me, choosing for life when even when the forces of death are so visible, and choosing for the truth even when I am surrounded with lies. I am tempted to be so impressed by the obvious sadness of the human condition that I no longer claim the joy manifesting itself in many small but very real ways. The reward of choosing joy is joy itself. Living among people with mental disabilities has convinced me of that. There is so much rejection, pain, and, woundedness among us, but once you choose to claim the joy hidden in the midst of all suffering, life becomes celebration. Joy never denies the sadness, but transforms it to a fertile soil for more joy.

I don’t know how to celebrate in the midst of this deep sadness. I don’t know how not to feel guilty about the comfort and safety of my situation. So for the dead, I pray, let perpetual light shine on them; may they rest in peace. And for myself and all the world, I pray, kyrie eleison. 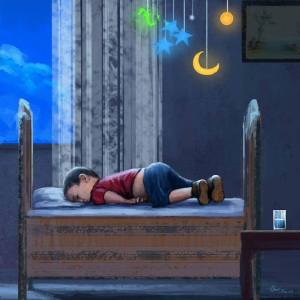 Some days are like that. All quiet except for the sound of the rain, then hail, then rain again on the skylights. Sometimes it’s a happy quiet. Today, not so much. I’ve been thinking about tragedy. Not Greek tragedy or Shakespeare, but disaster and loss. Because the ethics essays are in, and two of them are about abortion, I have been thinking about that, too. It’s all of a piece, really: tragedy. When things go awry, terribly awry, and things fall apart.

My position on abortion has always been the same: it’s not for me. Beyond that, it’s complicated. It’s complicated because my reasons for not having an abortion are not universal ethical principles. Yes, I do think that the growing baby in my womb (no, not now!) is a baby, whether it’s a baby at the embryonic stage or further along. That’s not a universally acknowledged truth. It is a narrative: it is the story that I tell to describe what is happening. I wouldn’t terminate a pregnancy not because I think an embryo or fetus has ‘rights’. (Does the embryo have the same claim on my care as my four children? On what grounds could I decide?) Rather, I wouldn’t terminate a pregnancy because I take life as it comes. I look for remaking, not un-doing. Pregnancy happens. Ok, now what? I look forward. My story changes. A new character appears.

The ball is in my court. How do I play it? In my story, just passing it back, or grounding it (to switch to an American football metaphor) isn’t an option. I have to be creative, flexible, discerning and focused, to be generous, and move the ball forward.

I have to improvise. There’s no script, just my sense of the movement of the plot. This isn’t what I planned. Not at all. But life happens to us when we’re making plans, right? This life.

I appreciate that not everyone lives life in the same way. Pregnancies disrupt our routines–and not just the timetable, but the rhythms of our lives. Bad things happen. Rape happens. Domestic violence happens. What then?

That’s when it gets complicated. My story doesn’t involve either of those tragedies. It does involve a child with trisomy-21, one wanted but extremely badly timed pregnancy and one truly unwelcome, shock-to-the-system, life-altering, body-damaging pregnancy. A pregnancy so disruptive to my whole world that I thought maybe it would have been better if I had lied about the test being positive and quietly terminated the pregnancy. Why didn’t I?

Because that’s just not the way I play it. I improvised. And I came up with a sheared pelvis and the costs of daycare and a horrible 18 months of depression and sleep deprivation…as well as an absolutely delightful little girl.

My story has changed.

I realize that not every story has a happy ending. Miscarriage, infant deaths, children dying of cancer and all the trauma and tragedy in the world remind me of that constantly. We can’t undo it. I read the tragic stories through tears. I pray for the parents and the children–those I know, and many, many more I don’t know. I only know a very tiny corner of that grief, but I know a little bit about everything falling apart. I know that space and time and grace and healing are oh, so necessary and sometimes so impossible to seek, or even to receive. I pray for strength to remake, to mold something new out of the shards and the tears. I pray for hope to hold together the hearts of the survivors, the life-bearers.